"PID School Contest" ended, it was organized by Matematicamente.it in collaboration with the Department of Innovation Engineering of the University of Salento.

The competition was reserved to students of classes V for ICT and Telecommunications Technical Institutes, who study "Project management and business organization" (GPOI). It involved the creation of a PID (Initial Project Document ) for the creation of a information system chosen and proposed by the students.
The PID must be made according to the methods described in the book "Project management and organization of business - project management in the secondary school level", of Antonio and Martina Dell'Anna, and in monographic booklet: "The project SPOT , project plan and attachments ", Antonio Dell'Anna and Maria Pia  Accogli, both published by Matematicamente.it, licensed under a free Creative Commons BY ND, and published at http://projectmanagement.matematicamente.it. 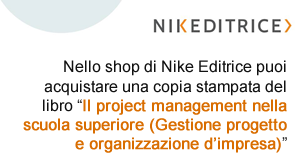